In a major report on U.S. labor conditions just published by ProPublica and NPR, researchers sledgehammer the workers’ compensation system, specifically insurers, state regulators and the business community. No matter what industry you work for or how you feel about the issue, if you have a job in America today you should read this report.

In their scathing critique of the industry, the report’s lead authors, Michael Grabell and Howard Berkes, highlight the staggering differences in benefits provided by different states. They ask, “How much is an eye worth?” and then show that it’s worth ten times more in Pennsylvania than it is in Alabama (around $261,000 in the first case compared to $27,000 in the second. If you’re going to lose an eyeball, make sure you do it in Pennsylvania).

They also point out that workers’ compensation premiums across the U.S. have been steadily falling since the early 1990s, and are now at a level comparable to the late 1970s. Moreover, they remind us that

Since 2003, legislators in 33 states have passed workers’ comp laws that reduce benefits or make it more difficult for those with certain injuries and diseases to qualify for them. Florida has cut benefits to its most severely disabled workers by 65 percent since 1994.

“That was always the No. 1 issue,” said state Sen. Brian Bingman, the Republican president pro tem of the Oklahoma Senate. “Your workers’ comp rates are way too high.”

Of course in all the time any of us have worked for any business anywhere in the U.S., we have yet to meet an employer who didn’t say workers’ comp rates were too high – no matter how high or low they were.

This report is thought-provoking and intelligently argued. Moreover, Grabell and Berkes have heavy-hitter John Burton agreeing with them. Of course, that might have something to do with Dr. Burton’s Quixote-to-the-windmill quest for another workers’ comp national commission.

The recent changes are “unprecedented in the history of workers’ comp,” Burton said in an interview. “I think we’re in a pretty vicious period right now of racing to the bottom.”

We hope that the reports will open a renewed conversation about how, while we’re all helping employers and insurers reduce costs, we could also do a better job actually providing America’s injured workers with the benefits to which all of us are legally entitled. Selected excerpts are included below. To read the report in its entirety, visit The Demolition of Workers Compensation.

Dennis Whedbee’s crew was rushing to prepare an oil well for pumping on the Sweet Grass Woman lease site, a speck of dusty plains rich with crude in Mandaree, North Dakota.

It was getting late that September afternoon in 2012. Whedbee, a 50-year-old derrickhand, was helping another worker remove a pipe fitting on top of the well when it suddenly blew.

As part of our ongoing investigation, we invite you to tell us about your experience navigating the workers’ comp system. Have something we should look into? 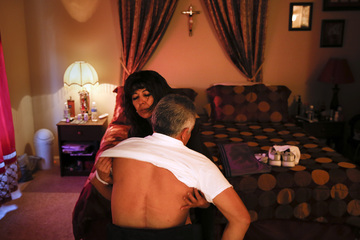 Oil and sludge pressurized at more than 700 pounds per square inch tore into Whedbee’s body, ripping his left arm off just below the elbow. Coworkers jerry-rigged a tourniquet from a sweatshirt and a ratchet strap to stanch his bleeding and got his wife on the phone.

It was exactly the sort of accident that workers’ compensation was designed for. Until recently, America’s workers could rely on a compact struck at the dawn of the Industrial Age: They would give up their right to sue. In exchange, if they were injured on the job, their employers would pay their medical bills and enough of their wages to help them get by while they recovered.

Over the past decade, state after state has been dismantling America’s workers’ comp system with disastrous consequences for many of the hundreds of thousands of people who suffer serious injuries at work each year, a ProPublica and NPR investigation has found.

The cutbacks have been so drastic in some places that they virtually guarantee injured workers will plummet into poverty. Workers often battle insurance companies for years to get the surgeries, prescriptions and basic help their doctors recommend.

Two-and-a-half years after he lost his arm, Whedbee is still fighting with North Dakota’s insurance agency for the prosthesis that his doctor says would give him a semblance of his former life.

The changes, often passed under the banner of “reform,” have been pushed by big businesses and insurance companies on the false premise that costs are out of control.

In fact, employers are paying the lowest rates for workers’ comp insurance since the 1970s. And in 2013, insurers had their most profitable year in over a decade, bringing in a hefty 18 percent return…